Mega Man – everyone’s favourite 8-bit blue character! If you live in Japan, you’ll know him as Rock Man. Mega Man was one of the first video games I played on the Nintendo. The Mega Man series would spawn ten games from 1987 – 2010. In 2018 we’ll say hello to Mega Man 11!

Ah Capcom. If there’s one video game company that really knows how to water down a series, it’s them.

I love the Mega Man series. They’re fun to play, easy to pick up and learn, and slightly rage-inducing.

HA! “Slightly” with you is an extreme understatement.

Anyway, I never paid much attention to the story behind Mega Man when I was a kid. I always assumed it was about an evil inventor named Dr Wily looking to conquer the world. Dr Light invents Mega Man to stop him and save the day.

But there’s more to it, isn’t there?

Yes, there is, and the story of the first Mega Man game varies depending on what version of the game.

How can the story vary between the two? Wait, why do you even need more of a story than “stop the evil scientist?”

Well, how about we start off simple and look at Mega Man?

Oh God! Mega Man looks like he needs to ease up on shoulder days at the gym. Dr Light should’ve built him a neck.

According to the game manual, in a city called Monsteropolis lives a great inventor called Dr Light. With his assistant, Dr Wily, Light builds the first near-human robot – Mega Man. Six more robots are built to help society. Wily turns on Light by reprogramming all the robots to conquer the world. Mega Man resists, so Light reprograms him to defend the city and save the day.

For someone who should be protecting the city, there seems to be a lot of destruction going on in the background of that video game cover. Ok a few things. First, why did Wily turn on Light?

I’m guessing Wily’s jealous of Light, or maybe he Dr Light to fulfil his dreams of world domination. It’s never explained in the game manual.

Fair enough. Now my second question, how the HELL are these robots meant to help humanity?! I mean seriously, why did Dr Light think a robot called “Bomb Man” would be any benefit to society?

Look at the size of that bomb!

The game manual says Bomb Man was designed to clear lands for construction. 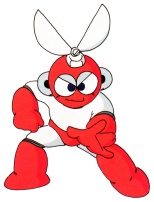 The game manual says he was designed to clear forests. All of Light’s robots were designed for construction building. Fire Man to melt metal. Guts Man to do the heavy lifting. Elec Man to oversee electrical operations.

Ice Man to cool off everyone after a long, hard day of work?

He was designed to work under freezing conditions.

WOW! Sucks to be him. Alright, so let’s move on to Rock Man. 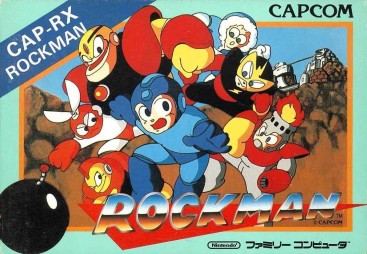 Now this cover is much more adorable than the Mega Man cover. Still, don’t let the cuteness of the murder bots fool you.

The story of Rock Man goes back prior to the game. It begins with two university students studying robotics, Thomas Light and Albert Wily.

Wait, shouldn’t it be the other way around? Why did they name Dr Wily after Albert Einstein? How was he evil?

Einstein’s research lead to the development of the atomic bomb.

Yeah I could see why Japan would villainise him. Now I think about it, Dr Wily kinda looks like Albert Einstein.

Light and Wily graduate and go on an invention spree. Light eventually creates the first artificial intelligent robot naming him Proto Man (who is known as Blues in the Japanese version). Proto Man ends up running away thinking Light wanted to reprogram him when in fact he wanted to just repair his malfunctioning power core.

Light continues his work and ends up making Rock (Mega Man) and his sister Roll who become his assistants. He then builds the six robot masters which leads to Wily sabotaging them for his world domination.

So why didn’t Wily reprogram Mega and/or Rock Man or Roll?

Basically, he thought they sucked. With Wily out of control, Rock offers to stop Wily so Light upgrades him into a murder bot. And the rest, as they say, is history. Mega Man goes on to defeat Wily and save the world.

Yeah… You’d think after Wily’s second attempt at world domination, Mega Man would put the evil scientist down for good, but I guess Mega Man is only capable of killing other robots like him, not real people.

Seems like a lotta back story for a basic game. Were the stories behind the other games in the Mega Man series just as interesting?

Some were very basic while others were… interesting.

I look forward to hearing about them!

And I look forward to telling them! Next week, we’ll dive into Mega Man 2. Until then, thanks for reading!